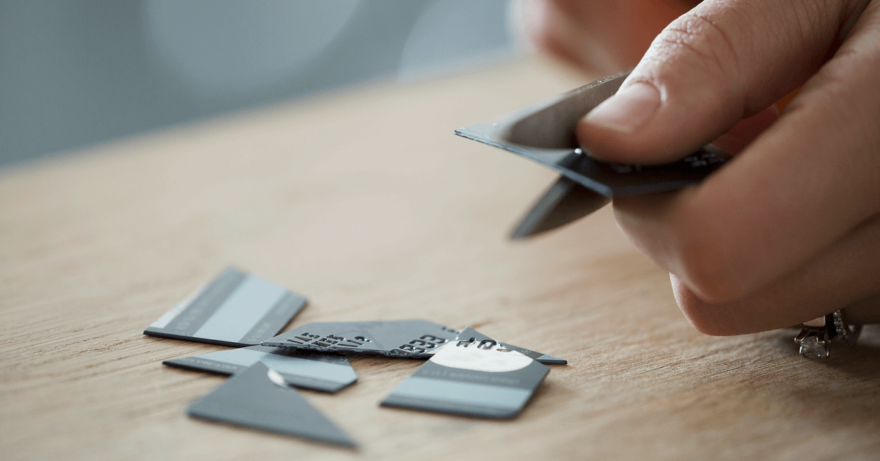 “CUT UP YOUR CREDIT CARDS NOW!”

I’m going to go out on a limb and say you’ve seen that phrase before.

It’s a popular tip in various best-selling books and may be the driving force in how you eventually eliminate your debt.

As a practicing financial coach, I’m not going to force anyone (including you) to toss their plastic in a wood chipper.

But for many, maybe even you, credit cards cause financial stress and can cost more than the benefits they offer. This can result in becoming stuck in an indefinite financial rut.

Now I’m well aware of the benefits of using a credit card. There’s more on that later. In fact, I still use one myself. But if you’re determined to eliminate your debt, you need to realize something:

The first step in eliminating your debt is not accumulating more of it.

'The first step in #debt elimination is not accumulating more of it.'Click To Tweet

So let’s explore why using credit cards while in debt is mostly a bad idea and how you can go about making a positive change.

How you ask? Well, it’s costing you by increasing your overall interest expense.

One of the greatest benefits of a credit card is the grace period.

This is where you can charge an item and not pay interest on that item if you pay it off within a set time period (typically at least 21 days).

In other words, you could go to the grocery store, purchase $150 worth of groceries and not technically pay for them until you receive the credit card bill. Assuming you pay the bill in full within the grace period, there would be no additional cost.

But what if you can’t pay the bill in full? What if haven’t paid your bill in full in several months or maybe even several years?

As soon as you allow a balance to revolve into a new billing cycle, you lose the benefit of the grace period.

In fact, if you lose the grace period any new charges you make to the card are subject to interest IMMEDIATELY.

Yep, that’s right. That pizza you just charged is starting to accumulate interest before you even digest it.

That pizza? It would be included in the calculation even if you planned on paying it off when the bill comes.

This is why I recommend you stop using credit cards if you’re carrying a balance. It’s costing you more money, even if you pay off the new charges every month.

Let’s assume you charge $1,500 of budgeted expenses to your card every month and the card already has a $10,000 balance. Let’s also say that the interest rate on the card is the national average, or about 15%.

Doing some basic math, we can say that your average daily balance will be around $11,500. You can expect your interest cost on that debt to be around $142 for the month.

But what if you used your debit card or cash for your budgeted expenses?

In that case, your average daily balance would only be the $10,000 that rolled over from the previous month. In that example you can expect your interest cost to be around $123 for the month.

So by charging the extra $1,500 to the card over the month, it ended up costing you an extra $19 in interest! That’s also assuming you actually pay off the $1,500 you charged which as you know, doesn’t always happen.

You need to be aware that the added interest is slowing down your debt elimination plan and causing you added stress as it seems like you’re not making any progress.

That $19 should be in your pocket working towards your goals. Not the goals of the big banks.

Stop using credit cards and focus on using your debit card or cash.

You May Be Spending More With Your Credit Card

How easy is it to spend money these days?

It’s super easy! You just hand someone a piece of plastic and boom, you bought something.

There’s no magic hologram that pops up showing your pile of money shrinking.

In fact, you may not even realize how much you spent until the bill comes in the mail a month later.

Because spending money has become so easy, you could actually be spending MORE with a credit card vs. if you would have just used your debit card or cash.

Studies have shown that some people would spend between 10-15% MORE just because they were using a credit card.

Almost immediately, they saw their average transaction jump from $4.50 to almost $7. All because of credit cards.

So if you don’t think about your budget and your goals every time you make a transaction, it could be costing you. Another reason to stop using credit cards.

I hear this one a lot:

“I only use my credit card for airline miles/cash back/points. Because I pay it off every month, I’m actually MAKING money!”

In order for this to be true, you’d have to stick to your budget every single month. If you overspend on the card like I mentioned in the previous section, you could actually be LOSING money.

For example, if you’re using a 2% cash back credit card but overspend by 10% per transaction on average, you’re losing 8% every time. That’s not a good deal at all.

Let me show you a quick advertisement to hammer home my point:

OK. Now that I’m done cutting up my credit card from Citi, let’s break this down a little.

The girl in the video has a dilemma. She REALLY wants to go to the Katy Perry concert but it seems that her friends parents are financially responsible and don’t want to buy them tickets.

So what does the girl do? She asks her financially irresponsible father to buy them ALL tickets. You go girl!

Just when you expect the father to go off on some life lesson about saving to meet goals (HA!), he offers to buy them all tickets.

He even reminds her not to forget her sister! You know why? He gets 2x the points on his credit card! YES!

If I counted correctly, that would be about 9 tickets if you include dad and his friend.

I’m not sure what the going rate for a concert ticket is these days, but I’m guessing someone as popular as Katy Perry can fetch at least $60. Therefore, dad can expect to pay at least $540 (9 tickets x $60 each) for everyone.

$540! That’s a high price to pay but you have to remember, he’s getting DOUBLE the points!

Let’s try and calculate how much those double points are going to net him. It has to be more than $540 right? Ahhhh! I’m getting excited!

OK. After checking out Citi’s website, I’ve determined that in almost all scenarios 1 point = $0.01 when they’re converted to gift cards. So, if he buys the tickets he’s going to get double points on the $540. Let me get out my calculator…..

He’s going to spend $540 that he probably doesn’t even have and it will only net him $10.80 in rewards? Um, that sounds like a horrible deal!

Alright, the majority of that last section was dripping with sarcasm.

But didn’t it sound exactly like how they are hyping it to you, the consumer?

Are people really going to buy into that?

You bet they are.

If a commercial makes it to TV (this one did), it means that it resonated well with focus groups.

You see, reward credit cards are just a marketing ploy.

Do you really think that companies would offer “cash back” and “airline miles” if it resulted in them losing money? Heck no.

You would NEVER do that deal if I put it in those terms.

So why spend $100 on something that doesn’t fit into your budget just to get $2 back? That’s stupid.

Don’t be a victim of advertising!

For example, if you’re close to a threshold in your reward program, don’t go out and buy something just to get the points.

If you have to spend $4,000 on things you normally wouldn’t buy just to get that $500 airline ticket, did you really give creditors the middle finger? Heck no.

They’re laughing all the way to the bank.

“Should I Cut Up My Credit Cards?”

Look, it may seem like I hate credit cards but I don’t. In fact, I use one. They can be a real asset when used correctly.

For example, I receive the following benefits when I use my credit card:

You see, there are plenty of benefits to using a credit card.

However, when you subject yourself to the disadvantages such as paying interest, buying things that are not budgeted for, late fees, etc., those benefits are erased.

If you can avoid each and every one of those disadvantages, then it’s OK to use a credit card.

When It’s OK To Use Credit Cards

Again, if you can avoid all the disadvantages of using a credit card, then as your financial coach, I’m cool with you using one.

But if you’re carrying a balance on the card you’re still actively using, you need to stop. Like now.

If you have a card that has a $0 balance or eventually get one paid off, you can certainly use the card again as long as you promise to pay it offer every month and stick to your budget.

In other words, if you budget $50 for entertainment for the month, you only allow yourself to spend up to that amount on your credit card. You then set aside that budgeted money for later for when the credit card bill is due. It’s that simple.

By using credit cards responsibly you can “reap the rewards” that are offered without any added cost. But tread lightly.

How did that advertisement make you feel? Have you ever fallen in the trap of “It’s OK, I get reward points”? Share your story in the comments!

If you know someone who is currently struggling with this, please be sure to share it with them using the social sharing bar at the bottom of this article.